I was just looking at my photo albums in my laptop when I saw this album and giggled. The photos were taken at Sapu Lidi, a sundanese restaurant located in Jl. Sersan Bajuri, Lembang, Bandung.

My hubby and I went there before we're married. It was his idea. He said the place was so good that many young couples choose the place for pre wedding photo location. We both were working in Jakarta so it's just nice to find some place in Bandung to refresh ourselves in the weekend and at the same time, visiting his parents.

Lembang is a cool mountainous town in the north of Bandung. Its highest point is the top of Tangkuban Perahu Mountain. It's famous for its fresh air and nice places.

It was a pretty funny experience and sometimes I just can't stop giggling when we talk about it. My hubby, who was then used to be my boyfriend :P, brought his old motorbike. We were going uphill, uphill and uphill, and ...the track was turned out to be pretty tough for the old motorbike.

There was a big bus in front of us and the bus was going so slowly. Since we rode an old motorbike and couldn't go faster on the track, we couldn't prevent being blown by its smoke. So we kept riding behind the bus, patiently. We frequently made jokes about his lame old motorbike and we just laughed at it :D.

My hubby and I like traditional sundanese food, kampung (country) style. It's simply because we rarely find gepuk, sayur kacang, pepes tahu, karedok, nasi goreng cikur (kencur), nasi tutug oncom, and many more in Jakarta. They are the food we grew up with and so eating them brought us so much memories :D.

We ordered nasi goreng cikur (I really don't know the english words for this fried rice :P) and karedok (mix vegetables with peanuts spicy sauce). It was too bad we didn't take the pictures of them.

The place was nice and green. There were wooden bridges, a lake and wooden shacks around the lake so we really had nice views and surroundings while we ate. It feels like we're back to nature and eating in kampung style 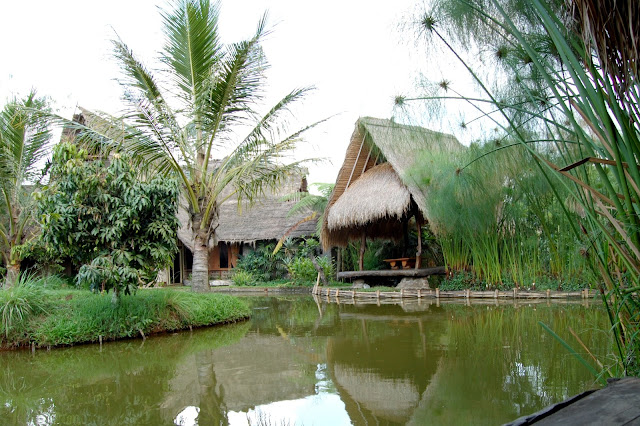 You can find out more reviews of this place here or just go to Sapu Lidi Official Website here.

PS: there is a sundanese music on the website :)