This is the last part of the Umrah post.

We spent five days in Mecca and the next day we were off to Medina. We stayed at Mubarak Al-Madinah Hotel in Medina for two days. We were so excited to see Nabawi Mosque.

Unlike Masjidil Haram, here in Nabawi Mosque women and men have their special gates and they cannot be seen together inside the mosque, even if it is a man with his wife. It was too bad that at every gate for women, we were checked by women securities. It seems like we were not allowed to bring cameras, though I saw some people managed to use their cameras inside. But my hubby said men were not checked by securities when they got in so some men can take pictures inside the mosque.

In Nabawi, there are places that attracts many people to pray. The tomb of our Prophet, Muhammad SAW, is located here. Also a place called the raudhah. Raudhah is located between the tomb of Prophet Muhammad and the mimbar. Raudhah is actually the original size of Nabawi Mosque back then. It is described as the garden of paradise.

“The area between my house and my mimbar is one of the gardens of paradise.” (Hadith Al-Bukhari).

Many Moslems come to the Raudhah to set their prayers and to feel closer to the prophet. How can we not, there is the tomb of our beloved prophet :). The area for women and men are separated so they couldn't see each other. There is a woman security too to manage the people inside it. Since everybody wanted to set their prayers so nobody is allowed to set their prayers too long. Some people who had been to Nabawi before asked me to say their regards to Prophet Muhammad here.

Here are some pictures My Hubby and I took in Medina,

The driver said it was a cracked radiator. All the passengers gave their water to fill the radiator but the bus only moved for two or three meters. It was really hot and we were so thirsty. My hubby and I get off the bus and took some "In the Middle of Nowhere" pictures. Hahaha...


The head of the group, H. Dede, finally decided that the first bus must be back and pick us up because it would be too long to wait for the sparepart for the bus and fix it. So we got into the first bus. All the ladies were sat down and many men except the elderly had to stand up along the way to Jeddah.

We finally arrived at Trident Hotel, Jeddah. We got a great room. Beside the bedroom and bathroom, we got our own living room :D. It was too bad that we only spent a day here. We were all starving and we're so thankful that the food was great. That night we went to the market to buy some things for our family and friends.

We bought slippers, perfumes, matching watches, etc. By the end of the day we went back to the hotel, there is a beggar asking for some money.

"Indonesia, Indonesia," he said with mimic, hands and expressions asked for money.
"No, we're poor already," My hubby said. Hahaha... that day we only have 15 Saudi Riyal for taxi. The rest of our money is in IDR, Indonesian currency. 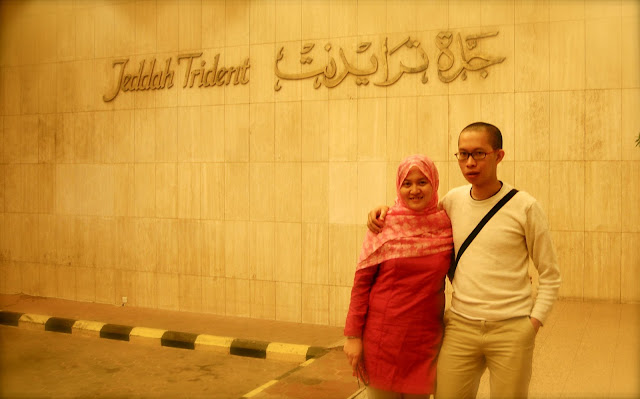 The Next day we went off to King Abdul Aziz Airport to fly home. The flight was delayed and we ran out of Saudi Riyal currency. We finally exchange IDR100,000 to buy two cups of coffee and some croissants :).

And that's the end. Hihihi... thank you for reading the story of our Umrah :). We hope we can go back there again someday for the Hajj. Aamiiin....