A few weeks ago I accompanied my sister looking for a dormitory house. She was accepted in PAAP Program Majoring Marketing Management Padjadjaran University and so she's officially a college student now. Congratulations neng! :D

Going around and about in Unpad Dipati Ukur and Jatinangor reminded me of my college life with my dear best friends: Nisa, Yogie, and Epoy. We were studying journalism and many times, we have to gather for the news for every project and assignment. Sometimes we're together, and sometimes there's just two or three of us.

We all live in the same dormitory except nisa. But Nisa came to our place and sleepover very often so that really doesn't matter. Hehehe..And last but not least, we have Vetri too. On the third year she moved  to our dormitory and so we all became close with her. All of us love watching horror movies, especially the Japan horror movies.

Nisa always says that horror movies is good because it has a catharsis function. It makes us excited when we got the movies VCD/DVD, scream out loud together when we watched it, it makes us feel relieve when it ends, and then we forget the problems we had. We fell asleep at the middle of the night and we all got up late at the next day.

I remember that night when we were going to watch horror movie and Nisa came to my room to use the bathroom. You know, back then, she has a long black straight hair. That night she has her hair loose, untied, and we were chatting while she was washing her face. I was fine until she used that facial foam all over her face and still talking to me. With her hair loosen like that, and with face foamy and white too. I'm just a little scared to talk to her because she looks scary. Hahaha...

I pushed her away and said "Huaaa!" Because her face is still foamy and I was scared. But Nisa still think that I saw ghost or something and she demanded that I told her what I saw. Hahaha.... Dodol... "It was you Nisa, it was you, with your long hair and foamy face. You scared me! Just go and wash your face!" Haha... and we laughed together.

Talking about Japan horor movies, I like them, but I just can't help the beginning of the story that usually took to long. I usually fell asleep 15 - 20minutes after the movie started :p. But then got up if the ghost came out or I just continued to sleep.

And there was a time when we watched "The Ring" or "Ringu" in Japanese. That night, Vetri was sitting behind me grasping the blanket and cover her face  screamed and shook my shoulder any time she felt scared, Nisa was sitting behind me too and she was nearer to the door, you know, sometimes we scared of the door when we watched horror movies for a stupid reason that the ghost will come to the room by opening the door first. Hahaha...

Yogie was sitting next to the wall, holding her pink piggie pillow to cover her eyes and I was laying beside her in front of the TV holding the, I don't remember what.
We played the VCD on a portable VCD player that was connected to Yogie's TV. When the ghost, Sadako, was began to come out of the TV, we were all panicked and screamed, holding everything we could hold and cover our eyes with them. And then, suddenly, my feet accidentally kicked the VCD player and the pictures was gone. Yep, the very tense scene and the cable was unplugged.

We were all too scared, except Yogie, of course. Hehehe. She reached the cable and plugged it to the TV. And guess what? The first scene we saw was the full screen face of Sadako and we again screamed very loud. We all tried to cover our eyes. With blanket, pillows, someone's shoulder, but when you seen it, you cannot unseen it, right? Hahaha... it was stupid. But you know, many times, we're not afraid to do stupid things with our best friends. We just know that we always be friend :).

Another stupid thing we did was this picture below. One day, I bought a cute notebook. In the shape exactly like like one of the four cards below. Nisa, Yogie, and Epoy decided too do something silly with the notebook. They whispered to each other in the classroom and giggled like little girls talking about something funny behind my back, saying that it was a secret and I will know when they are done.

It turned out that they wrote 100 things they know about me. I, myself think, "Man! how did they do that?" Hahaha...

And so we made the 100 things testimonies about each of us. It's pretty amazing that we know 100 facts or just stupid comments about each other. Some are true, some pretty close to true, and some we wrote just to make a fun joke.

And then, Epoy, if I'm not mistaken, had an idea to make it bigger, to make cute cards from it. We edited them and we printed them. Here they are, 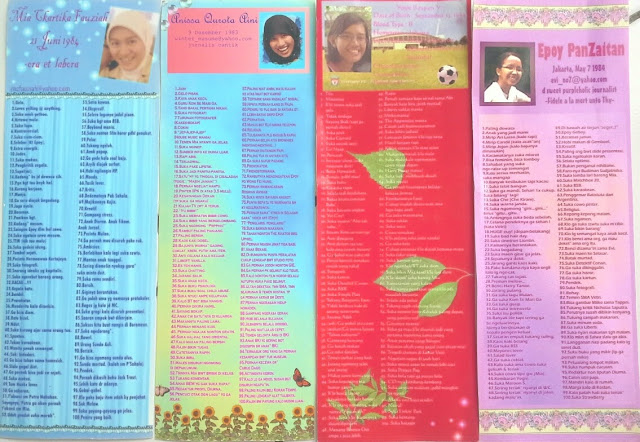 Of course some testimonies are no longer relevant today because it's been about 10 years now since we made them. Hahaha...I miss you all guys :*